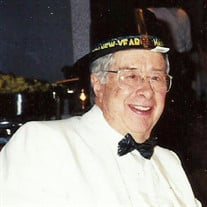 Robert Amos Wagoner, Jr., age 99 of Sparta, NC passed away Tuesday, May 7, 2019 at Hugh Chatham Memorial Hospital in Elkin, NC. He was born December 2, 1919 in the Whitehead community of Alleghany County to the late Robert Amos Wagoner, Sr., and Emma Pate Wagoner. In addition to his parents, he was also preceded in death by his wife Doris Richardson Wagoner; one sister, Marjorie Wagoner Choate. Amos attended Sparta Elementary School and graduated from Sparta High School in 1936. He attended and graduated from Oak Ridge Military Academy in 1938. He graduated with “AB” degree from the University of North Carolina at Chapel Hill in June 1940. He was employed as manager of Ashe Hardware, Inc., in West Jefferson, NC until January 1942 when he enlisted in the United States Army Air Corps. He served as an administrative non-commissioned officer until December 1945, when World War II had ended and he received an honorable discharge. He returned to manage Ashe Hardware until 1950 when his father became ill and he returned to Sparta to become part owner and manager of Farmers Hardware, Inc. He continued with Farmers Hardware until retirement in 1985. He married Doris Richardson on June 7, 1952 and they had two children, Mike and Marsha. He attended First Baptist Church of Sparta since early childhood, elected Deacon Emeritus, and was a member from 1940 until death. He was also a member of numerous committees. He served on the Town Council for several years, and one term as Mayor in the 1960’s when the first zoning ordinance was adopted. He was a member of the Alleghany Memorial Hospital Board of Trustees for thirty-nine years. He was an active member of the Hardware Association of the Carolinas, serving on the board of directors for eight years and President of the association in 1971 and 1972. He served on the local advisory board of the Northwestern Bank, First Union Bank and First Charter Bank for many years. He enjoyed family, fishing, horseback riding, most all sports, and associating with his friends. He is survived by one son, Mike Wagoner of Sparta; one daughter, Marsha Wagoner and Gary Teeter of Sparta; one granddaughter, Alex Wagoner of Sparta, one nephew, Bob Choate and wife Mary of Peachtree City, GA; special friends, Bill and Peggy Blevins and family; special caregivers, Cindy Braxton, Phyllis Dowell and Diane Norris. The family requests the honor of your presence at the Celebration of Life service to honor the life of Amos at 2:00 p.m. Saturday, May 11, 2019 at First Baptist Church of Sparta with Reverend John Attaway officiating. Inurnment will follow at Sparta Cemetery. The family will receive friends from 12:00 noon until time of the service at the church. The family requests no food at the home please. In lieu of flowers, memorials may be made to Alleghany Partnership for Children, PO Box 1643, Sparta, NC 28675, Children’s Home Society of North Carolina, PO Box 14608, Greensboro, NC 27415, or to First Baptist Church of Sparta Building Fund, PO Box 668, Sparta, NC 28675. Grandview Memorial Funeral Home is proudly serving the Wagoner family and if you wish, online condolences may be submitted to the family at www.grandviewfuneralhome.com.

The family of Amos Wagoner, Jr. created this Life Tributes page to make it easy to share your memories.