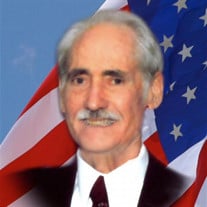 William Dare “Bill” Crosby, age 84 of Laurel Springs, NC passed away Friday, July 7, 2017 at his residence. He was born January 4, 1933 in Baltimore, Maryland to the late Fred D. and Beth A. Dare Crosby. In addition to his parents he was also preceded in death by his wife, Lorraine J. Crosby; stepson, Alfred Lowe. Bill served his country in the U.S. Marine Corps in the Korean War. He was a Baltimore County Police Officer for 25 years. He was a member of the Walter Frank Osborne, Jr., Detachment 1298, Marine Corps League of Sparta, NC, and also served as a Mason for over 50 years. He is survived by one sister, Alice Crosby Winslow of Baltimore, MD; one daughter-in-law, Doris J. Lowe of Casper, WY; numerous nieces and grandchildren also survive. The family requests the honor of your presence at the Gathering of Remembrance service to honor the life of Bill at 11:00 a.m. Tuesday, July 25, 2017 in the chapel of Grandview Memorial Funeral Home. Inurnment will follow in the Sparta Cemetery. The family will receive friends one hour prior to the funeral service at the funeral home. In lieu of flowers memorials may be made to Walter Frank Osborne Jr., Detachment 1298, Marine Corps League, PO Box 1298, Sparta, NC 28675, or to Alleghany Cares, PO Box 1655, Sparta, NC 28675. Grandview Memorial Funeral Home is proudly serving the Crosby family and if you wish, online condolences may be submitted to the family at www.grandviewfuneralhome.com.

The family of Bill Crosby created this Life Tributes page to make it easy to share your memories.

Send flowers to the Crosby family.