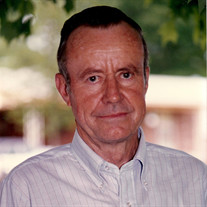 Burton Leff Edwards, age 90 of Sparta, NC passed away Saturday, June 16, 2018 at Alleghany Memorial Hospital in Sparta. He was born December 27, 1927 in Alleghany County to the late Glenn and Charity Caroline Sparks Edwards. In addition to his parents he was also preceded in death by his wife, Margaret Wheeler Edwards; one brother, David Junior Edwards; two sisters, Eva Edwards Hoppers and husband Hassell, Elsie Edwards Cooper and husband Charles; two brothers-in-law, Ernest Cleary and Donald Howland. Like many families in the Sparta area, Burton’s parents and siblings moved to Maryland to find work. Burton was a worker as a grocery clerk for ACME stores when he met Pat and they were later married. Then he became a truck driver, driving 18 wheelers over 1 million miles for Watkins Motor Lines of Tampa, FL, hauling fresh and frozen foods. After moving Pat and the children to Sparta, he worked as a sewing machine mechanic at Troutman Shirt Company and Pendry manufacturing until he retired in 1992. In 1993 he returned to the grocery business at the Walmart store in Galax, VA where he worked in the produce department for 20 years before “re-retiring” at the age of 86. Burton’s hobbies included cattle farming and vegetable gardening. He loved telling stories about his childhood when his parents owned a store in Sparta where the Senior Center now stands, as well as his many adventures as a truck driver and his brief stint in the Navy. His life was full of fun activities such as riding his bicycle round trip from Sparta to Winston-Salem, and hiding behind the counter in his parents’ store from a “giant” that came in one day. He is survived by one son, Burton Leff Edwards, Jr., of Wilkesboro; two daughters, Carol Edwards Perdue and husband Bill of Glade Valley, Eva Edwards Mathers and husband Scott of Raleigh; three grandchildren, Burton Russell Edwards and wife Angela of Woodlawn, VA, Luke Wheeler Mathers of Raleigh, Rachel Elise Mathers of Raleigh; two sisters, Ethel Edwards Cleary of Sparta, Doris Edwards Howland of Broadway; several nieces and nephews also survive. The family requests the honor of your presence at the funeral service to honor the life of Burton at 11:00 a.m. Saturday, June 23, 2018 at Grandview Memorial Funeral Home with Brother Ed Hall and Bruce Wayne Osborne VFW Post #7034 officiating. Interment will follow in Union Primitive Baptist Church Cemetery. The family will receive friends one hour prior to the funeral service at the funeral home. In lieu of flowers memorials may be made to Alleghany 4-H, PO Box 7, Sparta, NC 28675, or to the charity of the donor’s choice. The family would like to extend special thanks to the staff of Grayson Nursing and Rehabilitation Center, Brother Ed Hall and Pastor Bob Miller. Grandview Memorial Funeral Home is proudly serving the Edwards family and if you wish, online condolences may be submitted to the family at www.grandviewfuneralhome.com.

Burton Leff Edwards, age 90 of Sparta, NC passed away Saturday, June 16, 2018 at Alleghany Memorial Hospital in Sparta. He was born December 27, 1927 in Alleghany County to the late Glenn and Charity Caroline Sparks Edwards. In addition to... View Obituary & Service Information

The family of Burton Edwards created this Life Tributes page to make it easy to share your memories.

Send flowers to the Edwards family.