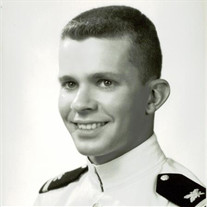 Carlton W. Mackey (Stan), age 83 of Ennice, NC died Friday morning, January 19, 2018 at Alleghany Memorial Hospital in Sparta, NC. He was born in Sandusky, Ohio to the late Carl Louis and Floy Wagar Mackey. In addition to his parents he was also preceded in death by his brother, Nobel Wagar Mackey (Dave). Upon his high school graduation Stan received a four year scholarship, Holloway Plan, USN, to Miami University, Oxford, Ohio where he met Anne. Upon receiving his BS in ED and Commission, he attended Naval Supply Corp School, Athens Georgia. He then served aboard an aircraft carrier, USS Tarawa and a destroyer escort, USS Hartley. Upon completion of that tour of duty, he returned to Miami University to earn his Master’s Degree in History. While working in Cleveland Heights, Ohio he completed his PhD in Counseling and Administration. While working in High Point City Schools, he was ordained as a Ruling Elder at First Presbyterian Church. He served Sparta Presbyterian Church in the same capacity. Stan is survived by his wife of 60 years, Anne Bailey Mackey. He was dedicated to Anne and their sons, David and Douglas (Teresa) Mackey; his beloved grandchildren, Sara, Aaron, Ben, Alexa, Shaun and Kate; great-grandsons, Peyton and Peter. He cherished his niece and nephew, Carla Stookey and Steve Mackey. He will be remembered for his kindness, humility, patience, strength of character, and sense of humor. The family will hold a memorial service at Sparta Presbyterian Church at 2:00 PM Saturday, February 17, 2018. The Reverend Bryan Hovey will officiate. Anyone wishing to make a memorial contribution may do so to the charity of their choice or to Sparta Presbyterian Church, PO Box 474, Sparta, NC 28675. Grandview Memorial Funeral Home is proudly serving the Mackey family and if you wish, online condolences may be submitted to the family at www.grandviewfuneralhome.com.

Carlton W. Mackey (Stan), age 83 of Ennice, NC died Friday morning, January 19, 2018 at Alleghany Memorial Hospital in Sparta, NC. He was born in Sandusky, Ohio to the late Carl Louis and Floy Wagar Mackey. In addition to his parents he was... View Obituary & Service Information

The family of Carlton W. Mackey created this Life Tributes page to make it easy to share your memories.

Send flowers to the Mackey family.