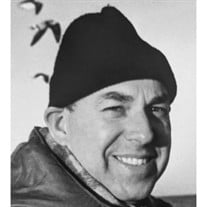 Clayton Lon Brooks, husband, father, and grandfather died peacefully at his home in Clemmons, NC on Wednesday, May 6th at the age of 83 after a prolonged battle with multiple cancers. He is survived by his wife of 57 years, Norma (Woodruff) Brooks, daughter Janet Brooks Carnell, son Stephen Brooks, his wife Elizabeth (Fox) Brooks, their daughters Isabel Engel and Sarah (Cate) Brooks, and his siblings Pawnee Choate, Gertrude Crouse, Zane Brooks, Nelson Brooks, Mary Alice Hudson, Viola Shaw, Wayne Brooks, and many nieces and nephews. He is predeceased by sisters Eva Campbell and Lorene Presnell and his brother Lacy Brooks. Clayton was born on May 1, 1937 to Lawnie and Bessie Brooks in Glade Valley, NC as the ninth of eleven children. He graduated from Sparta High School in 1955 as the class president and a student school bus driver. He later attended the Nashville Auto Diesel Academy with aspirations of becoming a mechanic. Clayton enlisted in the US Army in 1957 where he was trained as a Morse Interceptor at Fort Devens, MA before assignment to the Army Security Agency. He was given the rank Specialist E-4 with Secret Security clearance and served in Sinop, Turkey. Afterward he was assigned to Vint Hill Farms Station, VA. During these Cold War postings, he helped to gather intelligence on the Soviet military and their missile programs. His experience there eventually led him to his hobby of Amateur Radio where he earned a General Operator's license. He returned to Sparta briefly in 1960 before accepting a job at Piedmont Airlines. There he worked as an Agent in Roanoke, VA and later transferred to Smith Reynolds Airport in Winston-Salem, NC. After 33 years of service, and through Piedmont’s merger with US Air, he retired from the airline in 1993. Later that year, Clayton found his true calling when he began work as a school bus driver for the Winston-Salem, Forsyth County school system. He was loved by the student riders as was made evident by the many gifts and cards he received from them over the years as well as a newspaper article spotlighting his dedication to them. He was often recognized in public by prior students where they also expressed fond memories of him. He eventually retired from the school system after 24 years in 2013. After fully retiring, Clayton and Norma enjoyed time with their family and traveled across the US and the UK. Their most recent trip to Ireland was cut short, and they returned home as the COVID-19 pandemic began to shut down much of the world. Clayton was an avid reader, loved playing music, and building furniture and other things. Growing up on a farm, he had a talent to build or fix just about anything. His carpentry, electrical, plumbing and cabinet making skills allowed him to generously help family and friends in many, many projects. Although many loved ones have expressed the desire to attend a memorial at this time, Clayton would not have wanted to risk anyone’s health in order to do so. Because of the pandemic, a small private service will be held for only the immediate family at this time. A public event to celebrate his life will be scheduled and announced at a later time when it is safe for people to gather. The family is especially thankful for the help of all of their neighbors, family, and friends who gave assistance in Clayton’s final days. They made this difficult time more comfortable for Clayton and his family. In lieu of flowers, the family has requested that donations be made to Trellis Supportive Care at www.trellissupport.org. Grandview Memorial Funeral Home is proudly serving the Brooks family and if you wish, online condolences may be submitted to the family at www.grandviewfuneralhome.com.

Clayton Lon Brooks, husband, father, and grandfather died peacefully at his home in Clemmons, NC on Wednesday, May 6th at the age of 83 after a prolonged battle with multiple cancers. He is survived by his wife of 57 years, Norma (Woodruff)... View Obituary & Service Information

The family of Clayton Brooks created this Life Tributes page to make it easy to share your memories.

Send flowers to the Brooks family.