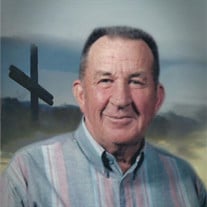 Clifford Feadore Pendry, age 90 of Ennice, NC passed away Saturday, October 7, 2017 at his home surrounded by his family. He was born May 14, 1927 in Alleghany County to the late Feadore “C” and Bessie Woodie Pendry. In addition to his parents he was also preceded in death by his siblings, Virgie Watkins and husband Carl, Buford Pendry and wife Easter, Guy Pendry and wife Mabel, Johnsie Sheets and husband Hobert, Leonard Pendry, Lib Choate and husband Dale, Bernice Miller and husband Guy; brother-in-law, Pastor Burt Richardson. Clifford retired as a Park Ranger from the National Park Service after 30 years of service. He was a charter member of the Glade Creek Volunteer Fire Department, serving as Chairman of the Board for several years. He was also a member of the Alleghany Fraternal Order of Police. Clifford was a charter member of Glade Creek Community Club, serving as President for 22 years. He was a member of Laurel Fork Presbyterian Church, joining in 1945. He attended Saddle Mountain Union Baptist Church until his health declined. He is survived by his wife of 69 years, Ruth Dickens Pendry; two sisters, Mrs. Iva Dale Richardson of Columbia, SC, and Mrs. Donna Phillips and husband Bill of Lakeland, FL; sister-in-law, Mrs. Joan Pendry of Lakeland, FL; several nieces and nephews also survive. The family requests the honor of your presence at the funeral service to honor the life of Clifford at 2:00 p.m. Tuesday, October 10, 2017 at Saddle Mountain Union Baptist Church with Brother Hugh Miller, Brother Ed Hall, Alleghany Honor Guard officiating. Interment will follow in the church cemetery. The family will receive friends one hour prior to the funeral service at the church and other times at the residence. Flowers are appreciated or memorials may be made to the Saddle Mountain Union Baptist Church Cemetery Fund, c/o Alease Moxley, 485 Old Hwy 21, Sparta, NC 28675. The family would like to extend special thanks to the staff of Medi-Home Hospice of Alleghany, and many friends and neighbors who visited or assisted in any way. Grandview Memorial Funeral Home is proudly serving the Pendry family and if you wish, online condolences may be submitted to the family at www.grandviewfuneralhome.com.

Clifford Feadore Pendry, age 90 of Ennice, NC passed away Saturday, October 7, 2017 at his home surrounded by his family. He was born May 14, 1927 in Alleghany County to the late Feadore &#8220;C&#8221; and Bessie Woodie Pendry. In addition... View Obituary & Service Information

The family of Clifford Feadore Pendry created this Life Tributes page to make it easy to share your memories.

Send flowers to the Pendry family.