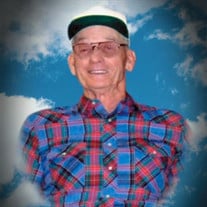 Arlice Clay “Dock” Whitaker, age 90, of Sparta, NC passed away Friday, June 2, 2017 in Sparta, NC. He was born April 9, 1927 in Alleghany County to the late John and Faye Murray Whitaker. In addition to his parents he was also preceded in death by his wife, Iva Lee Rector Whitaker; two brothers, Robert Lee Whitaker and Talmadge Whitaker; one sister, Marie Whitaker Belcher. Dock enjoyed life to the fullest- whether it be gardening, hunting, catching fish in New River and then grilling them and sharing with friends. He loved his dog Spot and enjoyed his companionship. He is survived by his sister, Bessie Ann Trail of Sparta; two nephews, Billy Osborne of Sparta, Tim Belcher and wife Debbie of Martinsville, VA; brother-in-law, Ed Belcher of Martinsville, VA; a host of friends also survive. The family requests the honor of your presence at the funeral service to honor the life of Dock at 2:00 p.m. Monday, June 5, 2017 in the chapel of Grandview Memorial Funeral Home with Brother Ed Hall and Beth Lyon-Smith officiating. Interment will follow in Shiloh cemetery. The family will receive friends one hour prior to the funeral service at the funeral home. The family would like to extend special thanks to Tom and Beth-Lyon Smith, Bill Johnson, Linda and Zeb Turner, Earl Murray, and all his neighbors and friends that have helped in anyway. Grandview Memorial Funeral Home is proudly serving the Whitaker family and if you wish, online condolences may be submitted to the family at www.grandviewfuneralhome.com.

The family of Dock Whitaker created this Life Tributes page to make it easy to share your memories.

Send flowers to the Whitaker family.