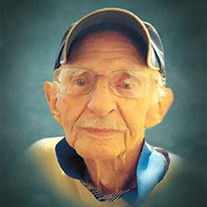 Duke Colvard Bledsoe, Jr., age 90 of 601 Johnson Ridge Road, Apt. 125, Elkin, NC passed away Tuesday, May 7, 2019 at Grayson Nursing and Rehabilitation Center in Independence, VA. He was born April 4, 1929 in Alleghany County to the late Duke Colvard Bledsoe, Sr. and Cynthia Pearl Reeves Bledsoe. In addition to his parents, he was also preceded in death by his first wife, Betty E. Bledsoe; his second wife, Karen A. Bledsoe; one half-brother, Baxter Bledsoe; one brother-in-law, Dewey Davidson. He grew up in Sparta, NC around his father’s Ford agency on his grandfather’s cattle farm, (M.E. Reeves and Jenny Thompson Reeves) on Meadow Fork Creek at Laurel Springs. “D.C.” as he was known in his younger years, attended school in Sparta and Laurel Springs and graduated from Glade Valley High School. He served in the U.S. Air Force, 1946 to 1949, and was discharged with the rank of Sergeant, after two years in the South Pacific and Japan. Duke attended Appalachian State and Sheffield School of Aeronautics in Miami, earning a Commercial Pilot’s license and Instructor, Multi-engine, and Helicopter ratings. He flew crop-duster planes in Florida, Texas, Mexico and Nicaragua, from 1953-1961. Duke operated an airport in Wilkes County, taught flying and was a corporate pilot, 1961-1966. He entered into real estate development and sales, and operated a 300 acre cattle farm. He married Betty Edwards in 1953 and to them one daughter was born, Cynthia (Cindy) Bledsoe on July 9, 1954. He is survived by one daughter, Cynthia (Cindy) Bledsoe Atwood and husband Gary of Sparta; one sister, Jane B. Davidson of Winston-Salem; one half-brother, Byron Bledsoe and wife Betty of Young’s Harris, GA; one nephew, Don Davidson, his wife Sonia and their children Ryan and Brittany. The family requests the honor of your presence at the funeral service to celebrate the life of Duke at 2:00 p.m. Friday, May 10, 2019 in the chapel of Grandview Memorial Funeral Home with Reverend Allen Reinhardt officiating. Interment will follow at Sparta Cemetery with full military rites conducted by Bruce Wayne Osborne VFW Post #7034. The family will receive friends from 12:00 noon until time of the service at the funeral home. The family requests no food please. In lieu of flowers, memorials may be made to Alleghany Historical-Genealogical Society, PO Box 817, Sparta, NC 28675. Grandview Memorial Funeral Home is proudly serving the Bledsoe family and if you wish, online condolences may be submitted to the family at www.grandviewfuneralhome.com.

The family of Duke Bledsoe, Jr. created this Life Tributes page to make it easy to share your memories.