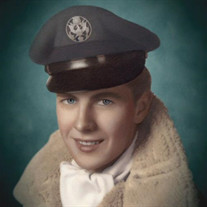 Edward James Killeen, Jr., age 83 of Sparta, NC died Saturday, May 13, 2017 at Grayson Nursing and Rehabilitation Center in Independence, VA. He was born May 22, 1933 in New York County, New York to the late Edward James Killeen, Sr. and Ann McNally Killeen. In addition to his parents he was also preceded in death by his wife, Louise Jane Davis Killeen; three children, James Killeen, Stephen Killeen and Michael Killeen; one sister, Nancy Grande. Edward was a member of St. Frances of Rome Catholic Church, where he also served as a board member. He served his country in the U.S. Air Force during the Korean War and was a Lieutenant with the New York Police Department, where he retired after 21 years of service. He is survived by one son, Patrick W. Killeen and wife Ofelia of Sparta; two daughters, Debra Jaggers and husband Joseph of Evergreen, CO, Terri Miller and husband Roger of Farmingdale, NY; seven grandchildren, Jenna Killeen, Amber Hack, Joseph Jaggers, James Jaggers, Jackie Weitzel, Johnathan Jaggers and Michael Miller; one brother, Frank Killeen of New York; eight great-grandchildren; several nieces and nephews also survive. The family requests the honor of your presence at the funeral mass to honor the life of Mr. Killeen at 3:00 p.m. Wednesday May 17, 2017 at St. Frances of Rome Catholic Church in Sparta with Reverend James A. Stuhrenberg officiating. Burial will follow in the church cemetery with full military rites conducted by Bruce Wayne Osborne VFW Post #7034. The family will receive friends from 11:00 a.m. to 12 noon Wednesday May 17, 2017 at Grandview Memorial Funeral Home. In lieu of flowers memorials may be made to Cystic Fibrosis Foundation, 4600 Park Road, Charlotte, NC 28209. Grandview Memorial Funeral Home is proudly serving the Killeen family and if you wish, online condolences may be submitted to the family at www.grandviewfuneralhome.com.

The family of Edward James Killeen Jr. created this Life Tributes page to make it easy to share your memories.

Send flowers to the Killeen family.