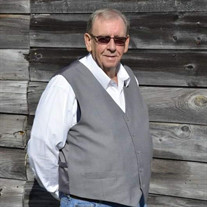 Edward Joseph Lyons, age 72, of 434 Rash Road, Glade Valley, NC passed away Sunday, January 12, 2020 at Woltz Hospice Home in Dobson, NC. He was born August 16, 1947 in Alleghany County to the late Stewart and Annie Blackburn Lyons. In addition to his parents, he was also preceded in death by one brother, Hardin Lyons; two sisters, Thelma Harris and Imogene Swails. Edward served in the U.S. Army from July 1966 to July 1968. He retired from Lowes Companies in 1995 as a Senior Project Supervisor. He worked for several years at Roaring Gap Club as a Grounds Maintenance Supervisor. He later went to work at Alleghany In Motion doing transportation. Edward’s interest in classic cars was shared by his family. He enjoyed building and working in the shop, “His Pout House.” Many hours were spent pondering over his latest project or figuring out how to make it “sound better.” Edward has played music most of his life. He could pick up an instrument and play a tune in just a few minutes. He always said Ben Harris was his teacher. He played the drums, the guitar, the mandolin, the bass, and the piano. He travelled with several gospel groups sharing the gospel thru songs. Mike and Warner Golds, Marvin and Betty Shaw, Pam Spurlin Hoke, City Bound, Kelly, Melanie, Allison, PJ and Rick, and with the Liberty Singers, Dennis Joines, Paul and Sue Wagoner. There were many hours of practice, jamming, and doing what he loved. Edward was man of few words. He said what he thought and moved on. He would listen and give advice if you ask for it. He touched many people in all his years of travelling. He was a true friend. He loved his family and always wanted them to do their best. He loved US! He is survived by his wife of 38 years, Carolyn Andrews Lyons of the home; three sons, Eddie Lyons and wife Sytiva of Grassy Creek, Greg Lyons and wife Melinda of Crumpler, Adam Lyons and wife Brittany of Glade Valley; one daughter, Alicia Andrews Ogle and husband Brian of Seymour, TN; three grandsons, Andrew Roberts of Sevierville, TN, Elijah Lyons of Crumpler, Ethan Lyons of Crumpler; special canine friend, Tater; several nieces and a nephew also survives. The family requests the honor of your presence at the funeral service to honor the life of Edward at 7:30 p.m. Wednesday, January 15, 2020 in the chapel of Grandview Memorial Funeral Home with Reverend Derek Cowan, Reverend Russell Sheets, and Reverend Arlice Thomas officiating. The family will receive friends from 4:00 p.m. until 7:00 p.m. Wednesday evening at the funeral home and other times at the residence. A private graveside service will be held Thursday at New Salem Cemetery with full military rites conducted by Bruce Wayne Osborne VFW Post #7034. Flowers are appreciated or memorials may be made to New Salem Cemetery Fund, c/o Linda Killon, 52 West Hill Lane, Sparta, NC 28675. The family would like to extend special thanks to all the family and friends for the visits, calls, and prayers. Grandview Memorial Funeral Home is proudly serving the Lyons family and if you wish, online condolences may be submitted to the family at www.grandviewfuneralhome.com.

The family of Edward Lyons created this Life Tributes page to make it easy to share your memories.

Send flowers to the Lyons family.