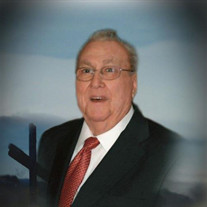 Elder Ernest W. Brackins, age 98 of Henderson and Low Gap, NC, passed away at his son's home surrounded by his loved ones on February 6, 2017. He was born in Alleghany County to the late Floyd and Ellen Brackins. In addition to his parents he was also preceded in death by his wife of 32 years who was the love of his life, Ina Grace Stamper Brackins; one daughter, Elsie Joyce Brackins Chadwick; one son, William Kemp Brackins; six brothers; four sisters. He grew up in Laurel Springs, NC, during the depression and only went as far as the 4th grade. What he may have lacked in formal education, he more than made up for in raw talent in carpentry work and in his spiritual life. Ernest was a talented carpenter and worked for contractors in NC and Maryland, as well as working and retiring from the federal government at the MCAS Cherry Point. Ernest gave his life to the Lord at an early age and responded to his calling to preach. He had 70 years in the pulpit preaching the gospel in many states. Since “Pepaw/Pop”, as he was affectionately known by friends and family, was born in 1918 most folks commented on how interesting his journey was through life. Everyone always marveled at all of the history that he had seen in his lifetime and enjoyed hearing him speak about those events from his living perspective. In his retirement, Pepaw/Pop enjoyed being outdoors, his family, especially the grandkids and his bountiful garden each year. He is survived by two sons, Philip Brackins and wife Sharon of Henderson, Christopher Brackins and wife Mary Ann of Pinnacle; nine grandchildren, Joshua, Amanda, Matthew, Christina, Hazen, Martin, Quick, Bethany, and Bryan; several great-grandchildren; numerous nieces, nephews, other relatives and friends also survive. The family requests the honor of your presence at the funeral service to honor the life of Ernest at 1:00 p.m. Friday, February 10, 2017 in the chapel of Grandview Memorial Funeral Home. Interment will follow at Antioch Cemetery in the Stratford community. The family will receive friends from 11:00 a.m. until time of the service at the funeral home. The family wishes to thank the many medical professionals that were involved in Pepaw’s/Pop’s care since his diagnosis. Flowers are appreciated or memorials may be made to Antioch Cemetery Fund, c/o Tom D. Atwood, 1952 US Hwy 221, Sparta, NC 28675. Grandview Memorial Funeral Home is proudly serving the Brackins family and if you wish, online condolences may be submitted to the family at www.grandviewfuneralhome.com

Elder Ernest W. Brackins, age 98 of Henderson and Low Gap, NC, passed away at his son's home surrounded by his loved ones on February 6, 2017. He was born in Alleghany County to the late Floyd and Ellen Brackins. In addition to his parents... View Obituary & Service Information

The family of Eld. Ernest W. Brackins created this Life Tributes page to make it easy to share your memories.

Send flowers to the Brackins family.