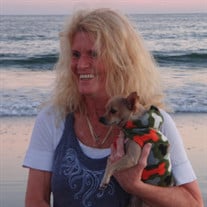 Francine “Frani” Weigand Richardson, age 65 of Whitehead, NC passed away Tuesday, September 12, 2017 at Woltz Hospice Home in Dobson, NC. After a long battle with cancer, she is now free from pain. She was born May 15, 1952 in Harford County, Maryland to Frank and Joleen Earnest Weigand. She was preceded in death by her father; daughter, Jackie Jo Kinsey; sister, Cassie Weigand Edwards; father-in-law, Dean Richardson; great-niece, Chrisandra Denny. Frani was a beautiful soul and brought laughter, smiles and happiness to all who encountered her. She knew no strangers and treated everyone with love and respect. Just ask almost anyone she knew and they will have a funny Frani story. She and John lived and worked for almost 20 years in the Bahamas, and she brought love and laughter to the lives of the many people who are now scattered all over the globe. Her spirit will live on in those whose lives she touched both here and abroad. She is survived by her devoted husband, partner and best friend, John Richardson; sons Brien (Sandy) Kinsey of Whitehead, and Jody Mabe of Ennice; five grandchildren, Benjamin Kinsey of Sanford, NC, Finn Kinsey of Whitehead, Caleb Presnell of Sparta, Lauren Mabe of Sparta, and Hunter Mabe of Sparta; one great-granddaughter; her mother, Joleen Weigand of Elkin; sisters, Garalee (Jamie) Weldon of Elkin, Christal (Andrew) Bintliff of SC, and Katie (Chris) Connolly of Kannapolis, NC; four special nephews, Lee (Kari) Edwards of Christiansburg, VA, Cole (Amanda) Edwards of Sparta, Joe (Ashley) McMeans of Deltaville, VA, and BJ Dowell of Sparta; special niece, Rebecca Richardson of Ararat, NC; step-mother, Barbara Weigand of Kannapolis, NC; mother-in-law and friend, Betty Richardson of Whitehead, sister-in-law and bff, Milly Richardson of Whitehead , sister-in-law and friend, Deana Alspaugh of High Point; brother-in-law and friend, Ross Richardson. Also survived by five nieces, three nephews, six great nieces and four great nephews. The family will hold a private Celebration of Life ceremony at a later date. In lieu of flowers, please make donations to the cancer foundation of your choice. The family would like to extend special thanks to the staff of Woltz Hospice Home and Hugh Chatham Memorial Hospital. Grandview Memorial Funeral Home is proudly serving the Richardson family and if you wish, online condolences may be submitted to the family at www.grandviewfuneralhome.com.

The family of Francine Richardson created this Life Tributes page to make it easy to share your memories.

Send flowers to the Richardson family.