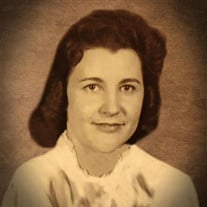 Gwyndola Blackburn Church, age 84 of Galax, VA passed away peacefully at her home Friday, April 7, 2017. Gwyn (as known by all her family and friends) was born in Alleghany County January 13, 1932 to the late Carl and Etta Duncan Blackburn. In addition to her parents she was also preceded in death by her husband, Bowie Church; two brothers, James Blackburn and Gayle Blackburn; one sister, Shirley Brewer. Mrs. Church attended cosmetology school in Asheville, NC and later moved to Sparta where she had a fulfilling life as a devoted wife, mother, sister, grandmother and great-grandmother. She worked alongside her husband Bowie at home in Sparta, NC as a hairdresser where she serviced many local people in the Sparta area as their personal hairdresser. Her greatest job in her lifetime was devoting herself to making her family feel fulfilled and loved. In her later years, she enjoyed the company of friends at the Sparta community Senior Citizen’s Center. She is survived by her devoted and loving son, Johnny Lynn Church and wife Margot of Pawleys Island, SC: two grandchildren, Laura Church Moxley of Glade Valley, Jacob Church of Sparta; three great-grandchildren, Drake Crouse, Eliza Moxley and Addison Church; two beloved sisters, Louella Rutherford and husband Rudolph, Pauline Burcham all of Galax, VA; many nieces and nephews also survive. The family requests the honor of your presence at the funeral service to honor the life of Gwyn at 2:00 p.m. Saturday, April 22, 2017 in the chapel of Grandview Memorial Funeral Home. Officiating the service will be Jason Cline, Hospice Chaplain at Mountain Valley Hospice and Palliative Care. Interment will follow in Sparta Cemetery. The family will receive friends one hour prior to the funeral service at the funeral home. In lieu of flowers memorials may be made to Mountain Valley Hospice and Palliative Care, 401 Technology Lane Suite 200, Mount Airy, NC 27030. The family would like to extend special thanks to all the extraordinary people at Mountain Valley Hospice for their exceptional loving care they provided to our mother, grandmother, great-grandmother, and sister. Grandview Memorial Funeral Home is proudly serving the Church family and if you wish, online condolences may be submitted to the family at www.grandviewfuneralhome.com.

Gwyndola Blackburn Church, age 84 of Galax, VA passed away peacefully at her home Friday, April 7, 2017. Gwyn (as known by all her family and friends) was born in Alleghany County January 13, 1932 to the late Carl and Etta Duncan Blackburn.... View Obituary & Service Information

The family of Gwyndola Church created this Life Tributes page to make it easy to share your memories.

Send flowers to the Church family.