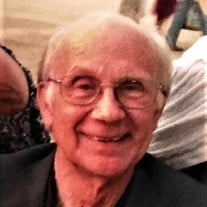 Harold Dean Miles, age 75 of Vinton, VA was called home to be with the Lord on Sunday, August 25, 2019. He is preceded in death by his father, John Raymond Miles, Jr., mother and father-in-law, Opal and Cecil Nicholson, and niece Jennifer Lynn Miles. Harold and his wife Linda was originally from Sparta, NC and moved to Roanoke after their marriage in January 1967 to begin their life together and were blessed with two daughters. He was employed with C&P Telephone Company where he took early disability retirement after 25 years of service. His love of music began in childhood. He enjoyed playing music with his high school friends and in a cover ban called the Vee Jays in Winston-Salem, NC. After moving to Roanoke, VA his music led him to join a local country western band and later as a member of the Virginians Gospel Quartet. Harold was an active leader of the youth at Lynn Haven Baptist Church through teaching and music and by living out his faith. Due to his long term illness with Multiple Sclerosis, diagnosed at age 33, he was limited in his ability to service at Bonsack Baptist Church the last nine years of his life. Harold continued to share his love of music, specifically the bass guitar, with his grandchildren and inspire them with this sweet spirit. Harold is survived by his wife of 52 years, Linda Nicholson Miles, daughters Deanna Miles Carter and boyfriend Bill Linkous, Julie Miles Blevins and husband Ronnie Blevins, Jr, three grandchildren Hunter Michael Carter and girlfriend Kaylynn Caldwell, Stella Mae Taylor, Josie Mya Taylor, three step-grandsons Caleb Matthew Blevins, Derek Andrew Blevins, Tristan Eli Blevins, and furry companion, Bud. He is also survived by his mother Earlene Miles, sister Wanda Shaw and husband Ray, brothers Larry Miles, Marty Miles and wife Charlotte, and multiple nieces, nephews, and many, many special friends also survive. The family requests the honor of your presence at the graveside service to honor the life of Harold at 11:00 a.m. Friday, August 30, 2019 at Whithead-Joines Cemetery. Flowers are appreciated, or memorials may be made to National M.S. Society or to Bonsack Baptist Church music Ministry. Grandview Memorial Funeral Home is proudly serving the Miles family and if you wish, online condolences may be submitted to the family at www.grandviewfuneralhome.com.

Harold Dean Miles, age 75 of Vinton, VA was called home to be with the Lord on Sunday, August 25, 2019. He is preceded in death by his father, John Raymond Miles, Jr., mother and father-in-law, Opal and Cecil Nicholson, and niece Jennifer Lynn... View Obituary & Service Information

The family of Harold Miles created this Life Tributes page to make it easy to share your memories.

Harold Dean Miles, age 75 of Vinton, VA was called home to be...

Send flowers to the Miles family.