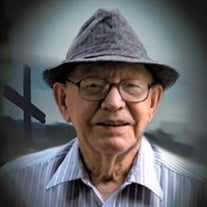 Reverend Hobert Harvey Dowell, age 92, of Sparta, NC, went to his Heavenly Home on March 18, 2020. He was born on February 20, 1928 in Piney Creek, NC, to the late Roosevelt and Vennia Jones Dowell. In addition to his parents, he was also preceded in death by his wife of 67 years, Pauline Lugene Dowell, five brothers, Roosevelt (RV) Dowell, John Paul Dowell, Robert Dowell, James Dowell, Thomas Dowell, five sisters, Lena Mullins, Faye Baldwin, Georgia Billings, Josie Hall, and Dora Mae Kilby, and one son, Hobert Aaron Dowell. Hobert was born to humble beginnings helping on the farm and trapping for furs from the time he was big enough to work. He was very dedicated to his mother. He worked sawmilling and various jobs he could find. He left North Carolina at the age of 14 to go to Maryland to find work. He cut timber in 1943, boarding with Calvin Childers. He kept cattle and sheep, worked at Aberdeen Sand and Gravel, worked at Franklinville Industries making radio cabinets, worked at Beta Shoe Company, did carpentry, painting, and masonry work. He was a “jack of all trades” in those days. He went to Martin Marietta in 1951 to work in electronics on aircraft. He earned his GED and studied Blueprinting at Kenwood High and Bel Air High while working. He later worked at Mergler and Havre de Grace as an electrician. He then went to Boeing doing electrical on Army helicopters for several years, moving his family to Delaware in 1965 to be closer to Philadelphia where the plant was located. He was laid off from there in 1971 and went to work for Charles Beatty finishing sheetrock. He moved back to North Carolina in 1973 and went to work at Chatham’s in Elkin for a short time before finding work in Alleghany doing sheetrock and painting. He became self-employed finishing sheetrock in 1975 and many people in Alleghany and surrounding counties know his work. He finally retired at age 81. He was also well-known as “Preacher Dowell” in Maryland, Pennsylvania, New Jersey, Virginia, and North Carolina. He came to know his Lord and Savior in August of 1950 and was Called to preach only a short while after that. He pastored churches in Maryland, New Jersey, Pennsylvania and North Carolina until he retired from Pastoring at the age of 84, though he continued to preach the Gospel. He also had The Word of Truth radio broadcast on WCOK from June 1973 until this past week. He loved his Lord and served Him diligently and the best he knew how. His favorite subject to talk about was his Lord. He is survived by three daughters, Nancy Darlene Dietle and spouse Marlin of Kingsville, MD, Judith Elaine Smith and spouse Eric of Ferguson, Barbara Dowell Wilson and spouse Kenneth of Ennice, one son, Samuel Ivan Dowell of Ennice, one daughter-in-law, Edna Lyons Dowell of Glade Valley. He is also survived by three brothers, Ivan Dowell and wife Alice of Maryland, Eugene Dowell of Maryland, Roger Dowell and wife Dorothy of Georgia, five sisters-in-law, Virginia Brackins, Shirley Brackins, Linda Dowell, Patty Tharpe, and Imogene Brackins, two brothers-in-law, Bill Brackins and Jack Kilby, five grandchildren, three great-grandsons, several step-great-grandchildren and many nephews and nieces also survive. A private Graveside Service will be conducted. A funeral service will be held at a later date. In lieu of flowers, memorials may be made to Chestnut Grove Baptist Church, c/o Charlie Bennett, 1309 Shawtown Road, Glade Valley, NC 28627, or to Mountain Valley Hospice, 1477 Carrollton Pike, Hillsville, VA 24343. The family would like to extend special thanks to the staff of Grayson Rehabilitation and Healthcare, Mountain Valley Hospice, and to Dr. Vanessa Fant. Grandview Memorial Funeral Home is proudly serving the Dowell family and if you wish, online condolences may be submitted to the family at www.grandviewfuneralhome.com.

Reverend Hobert Harvey Dowell, age 92, of Sparta, NC, went to his Heavenly Home on March 18, 2020. He was born on February 20, 1928 in Piney Creek, NC, to the late Roosevelt and Vennia Jones Dowell. In addition to his parents, he was also... View Obituary & Service Information

The family of Rev. Hobert Dowell created this Life Tributes page to make it easy to share your memories.

Send flowers to the Dowell family.