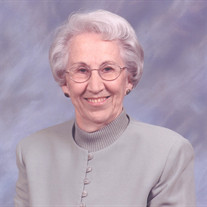 Iva Dale Pendry Richardson, age 93 of 2300 Clemson Road, Columbia, SC passed away Friday, May 18, 2018 at Providence Northeast Hospital in Columbia, SC. She was born May 3, 1925 in Ashe County to the late Feadore “C” and Bessie Woodie Pendry. In addition to her parents she was also preceded in death by her husband, Reverend Bert G. Richardson; four brothers, Guy Pendry and wife Mabel, Buford Pendry and wife Easter. Leonard Pendry and Clifford Pendry; four sisters, Virgie Walkins and husband Carl, Bernice Miller and husband Guy, Johnsie Sheets and husband Hobert, Lib Choate and husband Dale. She is survived by one daughter, Gloria Crist and husband Ron of Columbia, SC; one sister, Donna Phillips and husband Bill of Lakeland, FL; two sisters-in-law, Joan Pendry of Lakeland, FL and Ruth Pendry of Ennice; several nieces and nephews also survive. A graveside service will be conducted at 11:00 a.m. Tuesday, May 22, 2018 at Little Pine Church of the Brethren Cemetery in Ennice with Reverend Gary Benesh officiating. There will be no formal visitation at the funeral home. In lieu of flowers memorials may be made to Alzheimer’s Foundation, 400 Oberlin Road, Suite 220, Raleigh, NC 27605. The family would like to extend special thanks to the staff of Providence Northeast Hospital in Columbia, SC, Hospice Care of South Carolina and The Crossings at Columbia. Grandview Memorial Funeral Home is proudly serving the Richardson family and if you wish, online condolences may be submitted to the family at www.grandviewfuneralhome.com.

The family of Iva Richardson created this Life Tributes page to make it easy to share your memories.

Send flowers to the Richardson family.