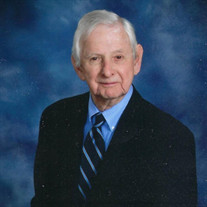 Samuel "Jerry" Jefferson Duncan, Jr. passed away peacefully on January 20, 2021. Jerry was born in Charlotte on October 31, 1933 to the late Samuel Jefferson Duncan and Fanny Lucille Miller Duncan. He spent his entire life in Charlotte, as did his parents and grandparents. As a youth, he loved exploring and camping around Briar Creek near Elizabeth and Chantilly with his neighborhood friends. He loved Charlotte, the beach, and the mountains, especially Glade Valley, NC. After attending Elizabeth Elementary School and Piedmont Middle School, Jerry graduated from Central High School in 1951. Always one to enjoy catching up with old friends, he looked forward to gathering at monthly alumni luncheons and class reunions. He attended Charlotte College and graduated from the University of North Carolina in Chapel Hill in 1955 with a degree in business. Jerry loved the Tar Heels and spent many fall Saturdays in Chapel Hill watching football and tailgating. He was a faithful Rams Club member and looked forward to attending the annual meetings. Regardless of the sport, he always pulled for the Tar Heels. Jerry spent his entire working career at Duke Power Company, now Duke Energy. He started as a part time clerk in high school and college. He joined full-time after his college graduation and his service in the US Army 82nd Airborne, which was spent in the Signal Corps in Germany. He worked in several areas at Duke Power, with his favorite being recruiting college students. He retired in 1989 as a Manager in the Information Systems Department. After retirement, he joined the Duke Powerful Retirees. He faithfully attended the Charlotte chapter meetings and served as Vice-President and President of the chapter. He served for several years on the chapter's Volunteer Board and enjoyed volunteering for many things including "ringing the bell" for the Salvation Army, packing shoeboxes for Samaritan's Purse, and working at Classroom Central. In 2013, Jerry was named Volunteer of the Year for the Charlotte chapter. Jerry was an active member of Myers Park Presbyterian Church where he served as an usher and head usher. He enjoyed attending Senior Scholars and Senior Forum meetings. He enjoyed the gym, spent many hours working out, and felt honored to have made so many friends there. In his younger years, he enjoyed running in 10K races. He is survived by his beloved wife of 59 years Helen, his daughter, Heather Duncan Lyle (Charles) and his grandchildren, Elizabeth Thompson Lyle and John "Jack" Rush Lyle, whom he loved so much. He also is survived by his sister Barbara Richardson, his brother John Duncan (Evann), as well as numerous cousins, nieces and nephews. We all will miss Jerry's contagious laugh, funny stories, and sense of humor. The family would like to thank the wonderful staff of Cuthbertson Village at Aldersgate for the loving care they provided during Jerry's stay there. He entered their care in the spring of 2019. A private family graveside service at the Glade Valley Cemetery will be held on Sunday, January 24, 2021 at 2:00 p.m. with the Rev. Frank Wyche from Sparta Presbyterian Church presiding. Memorials, if desired, may be made to the Glade Valley Cemetery Fund, c/o Trustee (Tom Gentry), 406 Glade Valley Road, Glade Valley, NC 28627. Grandview Memorial Funeral Home is proudly serving the Duncan family and if you wish, online condolences may be submitted to the family at www.grandviewfuneralhome.com

Samuel "Jerry" Jefferson Duncan, Jr. passed away peacefully on January 20, 2021. Jerry was born in Charlotte on October 31, 1933 to the late Samuel Jefferson Duncan and Fanny Lucille Miller Duncan. He spent his entire life in Charlotte, as did... View Obituary & Service Information

The family of Jerry Duncan created this Life Tributes page to make it easy to share your memories.

Send flowers to the Duncan family.