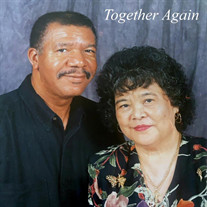 [Click Here to View Livestream of the Funeral] https://view.oneroomstreaming.com/authorise.php?k=1637444194149475 Jerry Simpson, of Canton, Ohio passed away Sunday, November 14, 2021. He was born on May 31, 1943 in Sparta, North Carolina to the late Cynthia Finley and Albert Simpson. He had 11 siblings. He was also preceded in death by his beloved wife of 41 years, Carmelita Simpson. Jerry retired from Stark County Community Action Agency where he worked for 25 years and he was an EEO officer. He served on the Canton City Tax Board for 10 years. He was a security officer for G.E. Capital. He also served in the Army where he was attached to the Seventh Special Forces Unit. During his overseas deployment to South Korea he served as a military dog handler in a maximum security area. Survivors include; three daughters, Carmelita Smith of Canton, OH, Susan and the late (Ernest) Adams of Chicago, IL, Carmela Jones and her husband, Felix Reese, both of Canton, OH; six grandchildren, Van Keith Jones, Jeremy Waters, Jerri Carmelita Adams (Belcher), Brooke Jones (Anderson), Timothy Smith, and Alicia Adams; two great-granddaughters, Alexandria Earley and Kaliyah Smith and a great-grandson Jamarion Jones. The family requests your presence at the funeral service to honor the life of Jerry at 12 noon, Saturday, November 20, 2021 in the chapel of Grandview Memorial Funeral Home. Interment will follow at White Plains Baptist Church Cemetery with full military rites conducted by Bruce Wayne Osborne VFW Post #7034.The family will receive friends one hour prior to the service at the funeral home. Those wishing to send their condolences or share a fond memory may sign the on-line guestbook at www.reedfuneralhome.com or www.grandviewfuneralhome.com.

Send flowers to the Simpson family.