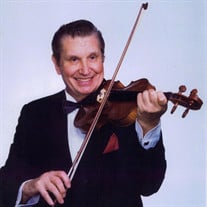 John William Ditinyak Jr. also known as Johnny Violin, age 85, of Glade Valley, North Carolina passed away on Wednesday, November 20, 2019 at his home. He was born on July 6, 1934 in Scranton, Pennsylvania, a son of the late John William Ditinyak Sr. and the late Kathrine Thomas Ditinyak. John began his violin studies at the age of six years old and gave his first recital at the age of eight at the Conservatory of Music, and went on to become at age fourteen a concert master of the Scranton Youth Symphony Orchestra. One year later at age fifteen John became the youngest professional member of the Scranton Philharmonic Orchestra, two years later at seventeen he became the principle violinist as concert master of the Wyoming Valley Symphony Orchestra. He then went on and was accepted under a scholarship at the Julliard School of Music where he continued his studies and mastered all of the musical classics while performing. He played first violin in the National Symphony of New York City and performed with Leonard Bernstein in concert at Carnegie Hall New York City. When John turned twenty years old Mr, Violin auditioned and was accepted for the Seventh Army Symphony in Germany, however the U.S. Military Academy at West Point had first choice so it drafted him for its own Symphony Orchestra. Soon after his discharge from West Point Military Academy, Mr. Violin moved to South Florida where he received a Master’s Degree in Music. While attending the University of Miami he met his wife of 63 years and they fell in love and had a family. He soon became a member of the first violin section of the Miami Symphony Orchestra after appearing with them for a couple of years. Mr. Johnny Violin went on to have an illustrious music career as an International Violinist, Conductor and Musical Director for his wife also known as Lisa Di Milo. During his career he has played before President Dwight D. Eisenhower, President Richard Nixon, President Gerald Ford, President George Bush, and also performed for Donald J, Trump prior to his presidency. He has also performed for Royalty such as Prince Rainier of Monaco, Princess Grace of Monaco, Prince Albert of Monaco, Princess Caroline of Monaco, and Prince Michael of Kent. Mr. Violin also has performed for Frank Sinatra, Dean Martin, Bob Hope, Sammy Davis Jr., Nat King Cole, Liberace, Luciano Pavarotti, Sophia Lauren, Bill Cosby, Christopher Reeve, Charlton Heston, Estee Lauder, Julio Iglesias, Regis Philbin, Jerry Lewis and the late Lois Pope, just to name a few. John leaves behind to cherish his memory his: Wife of 63 years, Nery Caridad Ditinyak of Glade Valley; son John (Evelyn) Ditinyak III. of Miami, FL, son Daniel (Alexnis) Ditinyak of Glade Valley; grandson, Daniel (Allison) Ditinyak, Jr.; granddaughter, Ashley (Roy) Beltran of Miami FL. A Ceremonial Tribute Service for John Ditinyak Jr. will be held on Tuesday November 26, 2019 at 4:00 p.m. in the chapel of Grandview Memorial Funeral Home with Pastor James Stuhrenberg, Pastor Oscar Ramirez and Pastor John Pokorney officiating. Full military rites will be conducted by Bruce Wayne Osborne VFW Post #7034. The family will receive friends beginning at 1:00 pm up until time of the service hour at the funeral home. In lieu of flowers, memorials may be made to Bruce Wayne Osborne VFW Post #7034, PO Box 1838, Sparta, NC 28675. The family would like to offer a special thank you to: Sam & Julia, Mac & Mary Jane, John & Janet, Cynthia, Dr. Jose Arocha, and Randy Hurley. Grandview Memorial Funeral Home is proudly serving the Ditinyak family and if you wish, online condolences may be submitted to the family at www.grandviewfunerahome.com.

John William Ditinyak Jr. also known as Johnny Violin, age 85, of Glade Valley, North Carolina passed away on Wednesday, November 20, 2019 at his home. He was born on July 6, 1934 in Scranton, Pennsylvania, a son of the late John William Ditinyak... View Obituary & Service Information

The family of John Ditinyak, Jr. created this Life Tributes page to make it easy to share your memories.