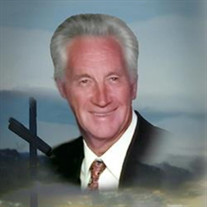 Click Here to View Livestream of the Service John Robert Kennedy, Jr. age 87 of Sparta, NC passed away Wednesday, December 1, 2021 at his residence. He was born March 16, 1934 to the late John R. Kennedy, Sr. and Eula Fowlkes Kennedy. In addition to his parents he was also preceded in death by his loving wife, Jo Ann Black Kennedy; one daughter, Vivian Kennedy Campbell; four sisters, Norma Jean Maines, Pauline Whitely, Lavonne Absher and Wilma Mason. John was a member of Mt. Carmel Union Baptist Church in Sparta. He loved farming and working with his cattle. He also was a loving husband, father, grandfather, great-grandfather and brother. He will be greatly missed but left us with many precious memories. He is survived by one son, Larry Kennedy (Cynthia) of Potomac Falls, VA; three grandchildren, Eric Campbell (Michelle) of Mocksville, Brittany Wade (Mike) of Greensboro, Lacey Kennedy of Potomac Falls, VA; four great-grandchildren, Eric and Raegan Campbell, Marlie and Zoey Wade; two sisters, Elaine Rector (Raymond) of Sparta, Reba Osborne of Piney Creek; and one brother, Terry Kennedy (Mary) of Sparta. He will be missed by several nieces and nephews who also survive. The family request the honor of your presence at the funeral service to honor the life of Mr. Kennedy at 2:00 p.m. Sunday, December 5, 2021 in the chapel of Grandview Memorial Funeral Home with Elder Pete Hawks officiating. Interment will follow at Kennedy Cemetery. The family will receive friends from 12 noon until 2:00 p.m. prior to the service at the funeral home. Flowers are appreciated or memorials may be made to Kennedy Cemetery Fund, c/o Debbie Johnson, P.O. Box 571, Jonesville, NC 28642. The family would like to extend special thanks to Medi-Home Hospice of Alleghany and his caregiver, Cassie Wright. Grandview Memorial Funeral Home is proudly serving the Kennedy family and if you wish, online condolences may be submitted to the family at www.grandviewfuneralhome.com.

Send flowers to the Kennedy family.