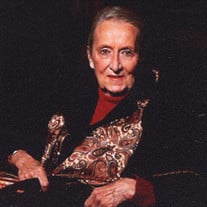 Julia "Julie" Ottesen, age 90, formerly of Traphill, NC passed away Saturday, October 9, 2021 at Life Care Center in Banner Elk, NC. She was born July 31, 1931 in Oswego County, NY to the late Kenneth Earl and Marion Elizabeth Dygert Nicholas. In addition to her parents she was also preceded in death by her husband, Ronald Henry Ottesen, and a sister Martha Nicholas Griffiths. Julia was a member of the Christ Episcopal Church in Sparta, NC. She started a home-based dressmaker/seamstress business called, "A Stitch in Time" in Clinton, NY. After meeting her future husband Ron and moving to New York City with him, she went to work as Office Manager for his special effects business, EFEX Specialists in Astoria, NY. Their company created special effects for films and commercials such as King Kong (1976), the Exorcist, The French Connection, The World According to Garp, and The Wiz. In October 1985, they retired and bought a boat named the Magic Dragon, They lived on the boat for a couple of years as they build their dream home on Pungo Creek in Belhaven, North Carolina. Julie studied stained glass, watercolor painting and basket-making and she later started Belle Port Baskets, traveled to craft shows around the southeastern United States and was accepted into The Southern Highlands Craft Guild. After frequent hurricanes in the 1990s, they decided to relocate to higher ground and moved to Traphill, NC. She is survived by two daughters, Lauren Sinclair of Boone, NC and Holly Sinclair of Chicago, IL, one sister Barbara Travers of Oriskany, NY and two grandchildren, Wade Sisson and Shokai Sinclair. She is also survived by many nieces and nephews. The family will hold a Celebration of Life Service at 2:00 pm, Saturday, October 23, 2021 at Christ Episcopal Church in Sparta, NC. Grandview Memorial Funeral Home is proudly serving the Ottesen family and if you wish, online condolences may be submitted to the family at www.grandviewfuneralhome.com.

The family of Julia Marion Ottesen created this Life Tributes page to make it easy to share your memories.

Send flowers to the Ottesen family.