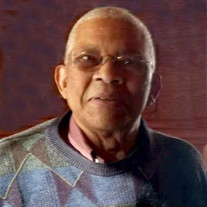 Ken Bailey was an honorable man, a hard worker, a devoted dad, and a forever husband to his wife of 53 years, Irene, who died in 2016. Born Kenneth Lee Bailey on March 17, 1939 in Wilkesboro, North Carolina, to Henry Bailey, a farmer, and Lila Petty Bailey, a homemaker, Kenneth was one of 11 children. He made a way for himself beginning at age 11, often sharing that he started working odd jobs and running errands for people in Wilkes County, who called him Little Britches. In his youth, Kenneth (or Ken Lee, as his family called him), attended Lincoln Heights Elementary and then graduated from Lincoln Heights High School in Wilkesboro, North Carolina. It was at Lincoln Heights High School where Kenneth met Irene Edwards, a smart, attractive and sassy Sparta, NC native, who quickly caught his attention and prompted him to make a 74-mile round trip drive each weekend to visit her “up on the mountain.” Kenneth was bitten by the entrepreneurial bug at an early age. Spending time with him meant hearing his stories about “running moonshine” in the hills of North Carolina and working with former NASCAR driver, Junior Johnson. Then in 1960, after graduating from high school, Kenneth moved to Chicago, Illinois, where two of his older sisters, Novella Graham and Mary Watkins, had migrated. In Chicago, Kenneth landed a job as a mill worker at Supreme Products Company. He was employed there for nearly five years while attending Dunbar Trade School (now Dunbar Vocational Career Academy) at night, honing his craft as a machinist. While enjoying city life and beginning a successful career, Kenneth regularly kept in touch with Irene. He convinced her that the two of them should become one, and the sweethearts married on June 7, 1962. Irene moved to Chicago where she and Kenneth settled on the South Side, attended Arnette Chapel AME Church, and made great friends. Through this union, Kenneth and Irene had one daughter, Kenetta. In the early 1970s, Kenneth started a job at Polygon Products Company on Lake Street. He worked there for 10 years as a tool and die maker. When the company was purchased by Designs by Ingrid, Kenneth remained there as plant manager until 1988. Always with a hankering to have his “own,” Kenneth started Bailey Consultants & Associates, where he advised companies on plastic molding and machinery moving. Several years later in 1991, Kenneth founded Technique Machinery Movers in Addison, Illinois, a heavy equipment and machinery transport company. He ran Technique until he sold the company and retired in 2009. Socially, Kenneth loved to BBQ, play golf, and spend quality time with family and friends. He believed holidays were for family, and thus hosted many Thanksgiving dinners, with Irene, at their home in Chicago. But, nothing brought joy to Kenneth like going back home to Wilkesboro, particularly at Christmas time, where he spent countless hours driving from house to house visiting relatives and friends. Even after 57 years in Chicago, if you asked Ken Bailey where he was from, he’d hold his head high and proudly say, Wilkes County. Of course, he’d have to explain to the “city slickers” in Chicago where that was. In addition to his parents and wife, he was also preceded in death by three sisters and five brothers. Kenneth leaves to cherish his memory his daughter Kenetta Bailey Hayes and her husband Lamonte; sister Novella Graham; brother Luther Parks and his wife Janice; sister-in-law Eva Bryan Brandon and her husband Theodore; many loving nieces and nephews; other extended family; a host of friends; and his faithful canine “pup” Dylan the Dog. The family requests the honor of your presence at the funeral service to celebrate the life of Kenneth at 2:00 p.m., Tuesday, October 9, 2018 at New Damascus Baptist Church in Wilkesboro, NC with Pastor John Sidney Bailey II officiating. The family will receive friends one hour prior to the funeral service at the church. Graveside service will be held at 5:45 p.m. Tuesday at Macedonia Baptist Church Cemetery, 1577 Macedonia Church Road, Sparta, NC 28675. Grandview Memorial Funeral Home is proudly serving the Bailey family and if you wish, online condolences may be submitted to the family at www.grandviewfuneralhome.com

Ken Bailey was an honorable man, a hard worker, a devoted dad, and a forever husband to his wife of 53 years, Irene, who died in 2016. Born Kenneth Lee Bailey on March 17, 1939 in Wilkesboro, North Carolina, to Henry Bailey, a farmer, and Lila... View Obituary & Service Information

The family of Ken Bailey created this Life Tributes page to make it easy to share your memories.

Ken Bailey was an honorable man, a hard worker, a devoted dad,...

Send flowers to the Bailey family.