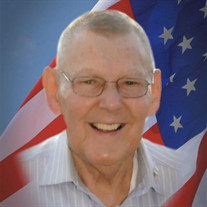 Kenneth E. Kern, age 86 of Sparta, NC passed away Sunday, January 7, 2018 at Alleghany Memorial Hospital in Sparta, NC. He was born May 18, 1931 in Elkhart, Indiana to the late Charlie H. and Margaret Mary Eppers Kern. In addition to his parents he was also preceded in death by one brother, Thomas John Kern. Ken served his country in the U.S. Navy, and was an aircraft mechanic during the Korean War. He was a second class petty officer. Ken was a faithful member for 30 years at Derita Baptist Church serving as deacon, Sunday school teacher, Scout leader and various other leadership positions in the church. After moving to Alleghany County he was a member of Laurel Springs Baptist Church and has served as a deacon and Sunday school teacher. Ken was a member of the Gideons International. He was a member of the America Legion Post #0542 and served as commander pro tem and finance officer. The best years of his life were in his 60’s to his early 80’s when he could fly his airplane. He was a member of the United Flying Octogenarians (UFO). He is survived by his wife Doris Jo Abee Kern of the home; one daughter, Cynthia Kern Shriver and husband Chris of Morrisville; one son, Kenneth Scott Kern and wife Donna of Huntersville; six grandchildren, Elizabeth Shriver Scarboro and husband Taylor of Fuquay-Varina, Joseph Shriver of Cary, Caroline Shriver of Morrisville, Katharine Shriver of Morrisville, Benjamin Kern of Huntersville, Anna Grace Kern of Huntersville; three great-grandchildren, Turner Scarboro, Birdie Ray Scarboro, Connor Shriver; sister-in-law, Karolyn Kern of Bristol, IN; brother-in-law, Timothy S. Abee and wife Trudy of Belmont; one niece, Susan K. Sandberg of Union, MI; two nephews, Thomas C. Kern and wife Lana of Elkhart, IN, Mike Kern, Sr. and wife Kathy of Charlottesville, VA; and very dear great-nephews and great-nieces also survive. The family requests the honor of your presence at the funeral service to honor the life of Ken at 11:00 a.m. Thursday, January 11, 2018 in the chapel of Grandview Memorial Funeral Home with Reverend Dana Hines and Brother Danny Pruitt officiating. Interment will follow in the Laurel Springs Baptist Church Cemetery with full military rites conducted by Bruce Wayne Osborne VFW Post #7034. The family will receive friends one hour prior to the funeral service at the funeral home. In lieu of flowers memorials may be made to The Gideons International, Alleghany Camp, PO Box 1891, Sparta, NC 28675, or to American Legion Post #0542, PO Box 1263, Sparta, NC 28675. The family would like to extend special thanks to the staff of Medi-Home Hospice of Alleghany and to the staff of Alleghany Memorial Hospital. Grandview Memorial Funeral Home is proudly serving the Kern family and if you wish, online condolences may be submitted to the family at www.grandviewfuneralhome.com.

Kenneth E. Kern, age 86 of Sparta, NC passed away Sunday, January 7, 2018 at Alleghany Memorial Hospital in Sparta, NC. He was born May 18, 1931 in Elkhart, Indiana to the late Charlie H. and Margaret Mary Eppers Kern. In addition to his parents... View Obituary & Service Information

The family of Kenneth E. Kern created this Life Tributes page to make it easy to share your memories.

Send flowers to the Kern family.