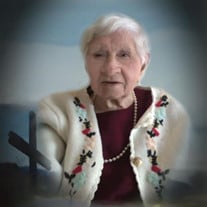 Mamie Brinegar Brooks, age 94 of 179 Combs Street, Sparta, NC passed away Tuesday, February 28, 2017 at Genesis HealthCare in Sparta, NC. She was born November 15, 1922 in Alleghany County to the late Isaac and Louisanne Brown Brinegar. In addition to her parents she was also preceded in death by her husband, Walter Brooks; one grandson, Sammy Moxley; two stepsons, Dale Brooks and Alvin Brooks; one step-daughter, Virginia Wilson; four brothers and three sisters. Mamie was a charter member at Landmark Church. She is survived by one daughter, Cordelia Moxley and Gray Stoker of Dodgeville, WI; one granddaughter, Becky Boyer and husband J.B. of Sparta; one great-granddaughter, Cassidy Moxley of Yadkinville; three special nieces, Mary Evans, Diane Norris, and Linda Hash; several nieces and nephews also survive. The family requests the honor of your presence at the funeral service to honor the life of Mamie at 11:00 a.m. Saturday, March 4, 2017 in the chapel of Grandview Memorial Funeral Home with Brother Doug Combs and Elder Raymond Crouse officiating. Interment will follow in Landmark Cemetery. The family will receive friends one hour prior to the funeral service at the funeral home. In lieu of flowers memorials may be made to Landmark Church or Landmark Cemetery Fund, c/o Charles Brinegar, 64 Brinegar Lane, Sparta, NC 28675. The family would like to extend special thanks to the staff at Genesis HealthCare in Sparta. Grandview Memorial Funeral Home is proudly serving the Brooks family and if you wish, online condolences may be submitted to the family at www.grandviewfuneralhome.com.

The family of Mamie Brinegar Brooks created this Life Tributes page to make it easy to share your memories.

Send flowers to the Brooks family.