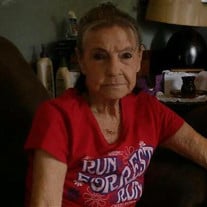 Nadine Hash Bare, age 72 of 14 McMillan Lane, Sparta, NC passed away Friday, September 22, 2017 at her daughter&#8217;s home. She was born February 14, 1945 in Grayson County to the late Phil and Elizabeth Anders Hash. In addition to her parents... View Obituary & Service Information

The family of Nadine Hash Bare created this Life Tributes page to make it easy to share your memories.

Send flowers to the Bare family.