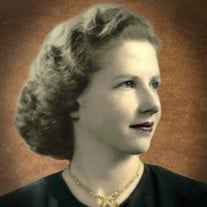 Reva Mae Rector DeBord, age 89 of 8721 NC Hwy 93, Piney Creek, NC went to be with her Lord surrounded by her family on January 15th, 2019 at Forsyth Medical Center in Winston-Salem, NC. Reva’s story began in Watertown, South Dakota on March 13th, 1929, the only daughter of Joseph Elmer and Florence Lillian Rector. Reva moved to Sparta, North Carolina as a young child. She grew up with six brothers, two older brothers, Carl and Cecil, and four younger brothers, Glenn, Benny, Willard, and Robert. She attended Sparta School. She worked at Hanes in Winston-Salem where she enjoyed time with her friends and playing basketball and softball. Reva married Oscar “Dale” DeBord on December, 13th, 1949. They had five children, Michael, who died shortly after birth, Danny, Mark, and fraternal twins Tim and Colleen. Reva and Dale, affectionately known as Granny and Poppy, spent 57 married years laughing, loving and spending their time with their children, grandchildren and great grandchildren until he passed away in 2007. It was obvious to anyone who knew her that Reva loved Jesus and her family. She also enjoyed music, singing, watching sports, laughing and making food for those she loved. She never wanted anyone to go hungry at her home. She was a member of God’s Will Missionary Baptist Church. Her greatest joy in life, beyond being a daughter of the King, were her children, grandchildren and great grandchildren. Reva was preceded in death by her husband, Dale, her infant son Michael, her parents Elmer and Florence, and brothers, Cecil, Carl, and Benny. Reva is survived by four children, Danny DeBord, Mark DeBord and wife Angie, Tim DeBord and wife Deana, Colleen Bradshaw; twelve grandchildren, Tina Brown and husband Travis, Traci Frost and husband Steve, Taylor Orlando and husband Jason, April DeBord, Naomi Bivins and husband Andy, Sara Smith and husband Eric, Hanna DeBord, Jessica Kilby and husband Cam, Erin Sims and husband Chavis, Tanner DeBord, Jenny Gregory and husband Thomas, Luke Nichols; great-grandchildren, Bryce Lazenby, Parker Frost, Logan Frost, Ella Bivins, Kate Bivins, Timothy Bivins, Julianne Smith, Scott Smith, Chayton Sims, Maddox Sims, Blake Gregory, Bailey Gregory, Blair Gregory and baby Karson Floyd Kilby on the way; three brothers, Glenn Rector and wife Sarah, Willard Rector and wife Rose, Robert Rector and wife Kathy; many nieces, nephews, relatives and good friends also survive. The family requests the honor of your presence at the funeral service to honor the life of Reva at 12:00 noon Friday, January 18, 2019 at Whitehead Union Baptist Church with Brother Hugh Miller and Pastor Allen Huffman officiating. Interment will follow in the Whitehead-Joines Cemetery. The family will receive friends one hour prior to the funeral service at the church and other times at the residence. In lieu of flowers, memorials may be made to God’s Will Missionary Baptist Church, c/o Richard Mooneyhan, 1629 Grandview Drive, Sparta, NC 28675. The family would like to extend special thanks to the staff of Alleghany Memorial Hospital and Forsyth Medical Center. Reva will be greatly missed by all of her family and friends until they see her again in heaven with Jesus. “To find a rainbow, you must weather a storm.” Grandview Memorial Funeral Home is proudly serving the DeBord family and if you wish, online condolences may be submitted to the family at www.grandviewfuneralhome.com.

The family of Reva DeBord created this Life Tributes page to make it easy to share your memories.

Send flowers to the DeBord family.