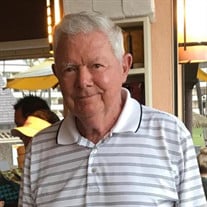 Mr. Robert Emerson Black, Jr. May 14, 1930 – January 1, 2022 Mr. Robert (Bob) Emerson Black, Jr., 91, of Roaring Gap, NC passed away peacefully on January 1, 2022 at his home. He was born May 14, 1930 to the late Emerson and Alma Black. Bob learned to work hard at an early age by mowing lawns and piling rock. He competed in shearing sheep and raising calves, which resulted in a state champion steer. He participated in many 4-H activities as well. In 1948, Bob enrolled at North Carolina State University as an agricultural student. During his college years he traveled with the Collegiate Meats and Livestock judging teams, was active in intramural sports and was a member of the Army ROTC. While in college, he spent his summers in Ft. Benning at the ROTC camp, working in the Wheat Harvest in Kansas, and as a Ranger on the Blue Ridge Parkway. After college, Bob was commissioned as a 2nd Lieutenant in the US Army in 1953, and served 2 years of active duty, mostly in Korea. Ten days after being discharged from the Army, Bob began his career with Lowe’s Companies, Inc., when Lowe’s was opening their 4th store. He started on the sales floor, and rose through the ranks to become Vice President of Purchasing. After 20 years of service, he retired in 1975 at the age of 45. In retirement, he was ALWAYS busy. He loved spending time outdoors on his farm and hunting. He spent a great deal of time serving others. Whether it was serving his alma mater (Alumni Association President and Wolfpack Club Board of directors), serving local organizations (Alleghany Education Foundation, Alleghany Chamber of Commerce, Lions Club, Sunday school teacher), or simply helping neighbors with a load of firewood, a trip to the doctor, or with the delivery of a meal, he LOVED helping his fellow man. He took great pride in being from Alleghany and was especially thrilled to have been involved with the revitalization of The Alleghany News, the construction of the Alleghany Inn, and the development of the Alleghany Fairgrounds. As a result of his service to others, he was awarded The Watauga Medal from NC State in 2005, (the highest non-academic award granted by the university) and The Order of the Long Leaf Pine in 2018 (the highest honor issued by the governor of North Carolina). In addition to his parents, Bob was preceded in death by his first wife, Bette Marcelle Blackburn, and a daughter, Cindy Black. He is survived by his wife, Carol Black, of Roaring Gap, NC; son, Robert Lee Black and wife, Tammy (son, Dylan) of Wilkesboro, NC; son, Michael Evan Black and husband, Michael Bost of Cary, NC; son, David Scot Black and wife, Alma (daughter, Laura and son, Brian, granddaughter Kendall) of Willow Spring, NC; son, Matthew Charles Black and wife, Pattie (son, Bobby) of Wilkesboro, NC; stepdaughter Kristen Parlon and husband Billy (daughter Jessica, son Will, granddaughter Stella) of Boston, MA; stepson Brendan O’Neil and wife Allison of Wilbar, NC;(sons, Kyle, Todd, and Ayden) of Wilbar, NC; sister, Ida Maude Collins of Wilkesboro, NC. A private family service will be held. A celebration of life will be scheduled at a later date. In lieu of flowers, contributions may be made to: Alleghany County Educational Foundation, Inc., PO Box 33, Sparta, NC 28675. Grandview Memorial Funeral Home is proudly serving the Black family and if you wish, online condolences may be submitted to the family at www.grandviewfuneralhome.com.

The family of Robert (Bob) Emerson Black, Jr. created this Life Tributes page to make it easy to share your memories.