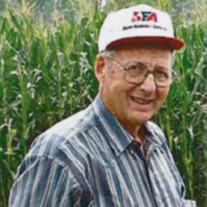 Tam Smith Gambill, age 94 of 145 Gambill Road, Sparta, NC passed away Wednesday, February 14, 2018 at Forsyth Medical Center in Winston-Salem, NC. He was born July 19, 1923 in Alleghany County to the late Robert Cleve and Maude McMillan Gambill. In addition to his parents he was also preceded in death by his wife of 65 years of marriage, Iris Brooks Gambill; two brothers, Arthur Gambill and Dailey Gambill; one sister, Marye Lineback: beloved friend and cousin, Bobby Joe Gambill. Tam was raised by the New River on the family farm and his young entrepreneurship began in 1946 by renting the Charlie Collins dairy farm in Sparta. This was his business plan to make a living and marry Iris. One year later, he began building a new dairy on what is now the family farm. He loved to tell the story of moving the cows from Sparta to the family farm and the challenges of crossing the New River. This effort began the journey of his successful farm business. He partnered with his father and brother Robert and established Gambill and Gambill Farms. They diversified their business with dairy and beef cattle, fertilizer spreading, and growing corn and tobacco. Tam began serving as a Board of Director in 1964 for Yadkin Valley Milk Board Cooperative/Queen Bess in Wilkesboro. He continued serving as a board of director during all the mergers of Tri State Milk Cooperative of Bristol, VA, Southeast Milk Sales, Dairymen Inc of Louisville KY, Mid-American Dairymen of Springfield, MO and retired from serving in 1991 after 27 years of service. Tam and Iris enjoyed traveling to many of the conferences with their good friends Jack and Nancy Phipps. Their travels took them to San Francisco, Nashville, Atlanta, Miami, New Orleans, Las Vegas, Louisville, KY among other cities. Tam also served on the North Carolina Forestry Board of Directors and Sparta’s First Citizens Bank Board of Directors. Also, he served as chairman for the Alleghany County Democrat Party. On February 21, 2017, Tam was recognized with the first Alleghany County Century Family Farm Award honoring the farm’s success and existence since 1830 and continuous family ownership. Tam was a beloved father, grandfather, great-grandfather, brother, uncle and friend to many. He is survived by three daughters, Judy Crouse and husband Gary of Wytheville, VA, Karen Leys and husband Marion of Sparta, Tammy Mason and husband Steve of Sparta; two sons, Gary Gambill of Sparta, David Gambill and wife LeAnn of Sparta; twelve grandchildren; nine great-grandchildren; one brother, Robert Gambill of Sparta; one sister, Dorothy Lepley of Towson, MD; several nieces and nephews also survive. The family requests the honor of your presence at the funeral service to honor the life of Tam at 2:00 p.m. Saturday, February 17, 2018 in the chapel of Grandview Memorial Funeral Home with Reverend John McCray officiating. Interment will follow in Elk Creek Cemetery. The family will receive friends from 6:00 p.m. until 8:00 p.m. Friday evening at the funeral home. In lieu of flowers memorials may be made to Elk Creek Cemetery Fund, c/o Bobbie Duncan, 4899 US Hwy 21 North, Sparta, NC 28675, or to Alleghany Hospital Foundation, 233 Doctors Street, Sparta, NC 28675. The family would like to extend special thanks to Tam’s caregivers, Ann Bolt, Holly Davis, Debbie Dooley, Cathie Nichols and Marlene Weaver. Grandview Memorial Funeral Home is proudly serving the Gambill family and if you wish, online condolences may be submitted to the family at www.grandviewfuneralhome.com.

The family of Tam Smith Gambill created this Life Tributes page to make it easy to share your memories.

Send flowers to the Gambill family.