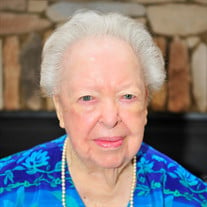 Thelma Forrest Osborne Davis, age 103, passed away peacefully on May 12, 2019. Thelma was born in Alleghany County on March 2, 1916 to the late Robert and Maude Hoppers Osborne. In addition to her parents, she was also preceded in death by her husband, Earl L. Davis, and her two sisters, Maggie Johnson and Virginia Setzer. She is also preceded in death by her first husband, Samuel Richardson. Following her graduation from Sparta High School in 1931, Thelma attended Appalachian State Teacher’s College and returned to Sparta to begin her teaching career in 1935. In the early 1940’s, Ms. Davis took a break from teaching, traveled to New York City and received a degree in portrait photography. She then came back to Sparta and opened a studio known as “Thelma’s Studio.” In 1947, Thelma, who had been widowed for several years, married Earl Davis, a disabled World War II veteran. Both decided to attend Appalachian State Teacher’s College to further their education. Thelma received her Bachelor of Science in Elementary Education and went back into teaching. Thelma would later also attend Western Carolina College to qualify to teach mentally challenged children. Because of her work, she was instrumental in starting one of the first programs for mentally challenged children in the State of North Carolina. Thelma taught school in Alleghany County for a total of 38 years. During this time, she was very active in the community, as a contributing member of the Sparta United Methodist Church, where she was the oldest member for many years. She was also active in the Association for Retarded Children, the Delta Kappa Gamma Society, the A.A.U.W (American Association of University Women), where she received an award for Volunteer Service, the Alleghany Historical Society and many other worthy causes. Following her retirement from teaching, Mrs. Davis continued to work for the handicapped of Alleghany County. One of her proudest achievements was working with others in the community that resulted in a facility in Sparta for the handicapped and disabled, known as ADAP, so that people would be able to live and work in the county. A street at this facility was dedicated to Thelma and named Davis Street in her honor. Mrs. Davis is survived by her daughter and son-in-law, Sharon and Chip Hamilton, of Port Orange, Florida as well as a host of nieces, nephews and cousins. A Celebration of Life service will be held at 12:00 noon, Saturday, June 15, 2019 at Sparta United Methodist Church. Inurnment will follow at Osborne Memorial Cemetery in Piney Creek. A fellowship of family and friends will be held from 6:00 p.m. until 8:00 p.m. Friday, June 14, 2019 at the Grandview Memorial Funeral Home for visitation and sharing of stories about her life. In lieu of flowers, memorial donations may be made to the Alleghany Historical-Genealogical Society, P.O. Box 817, Sparta, N.C. 28675, and Osborne Memorial Cemetery Fund, c/o Natasha Bourne, 6884 N.C. Highway 93, Piney Creek, N.C.28663, or to the Sparta United Methodist Church Prayer Garden, P. O. Box 697, Sparta, N.C. 28675. Grandview Memorial Funeral Home is proudly serving the Davis family and if you wish, online condolences may be submitted to the family at www.grandviewfuneralhome.com.

Thelma Forrest Osborne Davis, age 103, passed away peacefully on May 12, 2019. Thelma was born in Alleghany County on March 2, 1916 to the late Robert and Maude Hoppers Osborne. In addition to her parents, she was also preceded in death by... View Obituary & Service Information

The family of Thelma Davis created this Life Tributes page to make it easy to share your memories.

Send flowers to the Davis family.