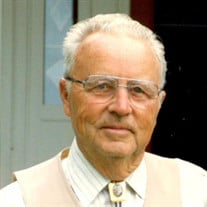 Lewis Charles"Tommy" Thompson, age 97 of Sparta, N.C. passed away Monday, May 18, 2020 at Forsyth Medical Center in Winston-Salem, N.C. He was born March 25, 1923 in Erie, Pennsylvania to the late Charles Lewis and Lena Gaugler Thompson. In addition to his parents, he was also preceded in death by his wife, Betty Louise Crandall Thompson; one grandson, William Bryan Adkins; two sisters, Elizabeth Thompson and Catherine Cook; one son-in-law, Arthur “Skeeter” Newton. Tommy was a member of Sparta United Methodist Church. He served his country in the U.S. Navy for twenty years. He was a retired Chief Warrant Officer. He served during WWII in the Mediterranean, North Atlantic, and the Pacific. He worked in the mortgage banking industry in Winston-Salem for over 25 years before retiring to Sparta. He is survived by one son, Tommy Thompson and wife Martha of Sparta; three daughters, Dottie Dorsett and husband Ted of Sparta; Donna Newton of High Point, Ann Johnson and husband Tom of High Point; ten grandchildren; two step-grandchildren; twenty great-grandchildren; one great-great-grandchild. The family will hold a private memorial service at a later date. The family requests no flowers, but memorials may be made in his honor to Alleghany Animal Shelter, c/o Twin Oaks Vet, 2970 US 21, Sparta, NC 28675. The family would like to extend special thanks to Dr. Mary Digel, and her staff, and also the doctors and nurses at Forsyth Novant Health in Winston-Salem, N.C. Grandview Memorial Funeral Home is proudly serving the Thompson family and if you wish, online condolences may be submitted to the family at www.grandviewfuneralhome.com.

Lewis Charles"Tommy" Thompson, age 97 of Sparta, N.C. passed away Monday, May 18, 2020 at Forsyth Medical Center in Winston-Salem, N.C. He was born March 25, 1923 in Erie, Pennsylvania to the late Charles Lewis and Lena Gaugler Thompson. In... View Obituary & Service Information

The family of Tommy Thompson created this Life Tributes page to make it easy to share your memories.

Send flowers to the Thompson family.