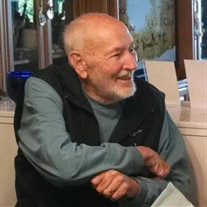 Vernell Vestal Ashley, age 84 of Sparta, NC passed away Monday, March 11, 2019 at his residence. He was born January 9, 1935 in Alamance County to the late Vestal and Melina Frances Dunigan Ashley. In addition to his parents, he was also preceded in death by one son, Joe Ashley; sister and brother-in-law, Dorothy and Cecil Stout. “Vern grew up in the mill town of Swepsonville, North Carolina. He graduated from Alexander Wilson High School where he was a member of the basketball team. He also played baseball through the community center. He fished the local ponds and the Haw River. He furnished the lady at the draft board fish and when she told him he was the last 23 year old to be drafted into the army she said “I guess this means I won’t get any more fish!” He was in the service of our county for two years guarding the atomic energy complex at Ft. Hood Texas. Upon leaving he moved to Eau Gallie, Florida always fishing on the causeways and rivers until a friend from North Carolina came by and asked him if he was tired of fishing and asked him to come to Cape Canaveral, Florida to work for Lockheed Space and Missiles building for the Navy Submarines. He said it would only be for a year except 32 years later he retired and moved back to his home state of North Carolina amongst dear friends and family. In his journey through life, he and his wife made many friends and glorious memories.” He is survived by his wife, Jo Ashley of the home; one step-daughter, Pam George and husband Darrell of Sparta; one stepson, Jeff Smith and wife Kathy of Clearwater, FL; five step-grandchildren, Joshua Gooderham, Kristan Gooderham, Kelly Gooderham, Brittany Smith, Jacob Smith and wife Callista; two step-great-grandchildren; one sister, Jannie Ashley of Swepsonville; two nieces, Donnie Curasi and husband Jackie of Swepsonville, Julie Perry of Swepsonville; one nephew, C.L. Stout and wife Deborah of Swepsonville. The family will hold a Celebration of Life service at a later date. The family would like to extend special thanks to the staff of Medi-Home Hospice of Alleghany. Grandview Memorial Funeral Home is proudly serving the Ashley family and if you wish, online condolences may be submitted to the family at www.grandviewfuneralhome.com.

Vernell Vestal Ashley, age 84 of Sparta, NC passed away Monday, March 11, 2019 at his residence. He was born January 9, 1935 in Alamance County to the late Vestal and Melina Frances Dunigan Ashley. In addition to his parents, he was also preceded... View Obituary & Service Information

The family of Vernell Ashley created this Life Tributes page to make it easy to share your memories.

Send flowers to the Ashley family.