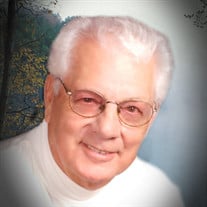 Walt Greer, age 86 of 90 Westview Drive, Sparta, NC completed his journey here on earth to begin a new life in heaven Monday, August 26, 2019 at Alleghany Health in Sparta, NC. He was born June 17, 1933 in Ashe County to the late Lloyd and Mattie Jordan Greer. In addition to his parents, he was also preceded in death by one sister, Pansey Burgess; one brother, Buster Greer. Life was difficult in depression era Ashe County. Walt was so proud of his first fishing rod and reel he bought from bottles he picked up. He kept that rod and reel his whole life. After high school, Walt moved to Norfolk, VA and joined the Army. After his military service, he returned to North Carolina; met and married Shelby Shumate, and began working for Lowes Hardware. In 1959, the young couple moved to Sparta and Walt began working in the new Lowes store in Sparta. He remained with Lowes until his retirement in 1978. Walt was a member of First Baptist Church of Sparta. Walt enjoyed his yard; watching his grandchildren grow, auctions, Fox news, and beagle puppies. He was hesitant to throw away any item that still might have use left in it. He liked talking to friends, visits from family, and watching the New River meander slowly downstream. He will be sorely missed. He is survived by his wife of 59 years, Shelby Greer of the home; one son, Craig Greer and wife Keli of Mooresville; one daughter, Tina Bentley and husband Joel of Hickory. He is also survived by three grandchildren who were a constant fountain of joy for him; Riley Greer, Gavin Bentley and Madeleine Bentley; two sisters-in-law, Marcella Greer of N. Wilkesboro, Charlotte Shumate of Crumpler; several nieces, nephews, and cousins also survive. The family requests the honor of your presence at the funeral service to honor the life of Walt at 2:00 p.m. Friday, August 30, 2019 in the chapel of Grandview Memorial Funeral Home. Interment will follow in Sparta Cemetery with full military rites conducted by Bruce Wayne Osborne VFW Post #7034. The family will receive friends one hour prior to the funeral service at the funeral home and other times at the residence. Flowers are appreciated or memorials may be made to St. Jude’s Children Hospital, 501 St. Jude Place, Memphis, TN 38105. The family would like to extend special thanks to his friends, neighbors, doctors and staff of Alleghany Family Practice. Grandview Memorial Funeral Home is proudly serving the Greer family and if you wish, online condolences may be submitted to the family at www.grandviewfuneralhome.com.

Walt Greer, age 86 of 90 Westview Drive, Sparta, NC completed his journey here on earth to begin a new life in heaven Monday, August 26, 2019 at Alleghany Health in Sparta, NC. He was born June 17, 1933 in Ashe County to the late Lloyd and... View Obituary & Service Information

The family of Walt Greer created this Life Tributes page to make it easy to share your memories.

Send flowers to the Greer family.